Back in the mid-1990s, when Capcom was feeling pressure from 3D fighters like Tekken and Virtua Fighter, they published their own 3D version of Street Fighter called Street Fighter EX. It was actually outsourced to a company called Arika, founded by ex-Capcom employee Akira Nishitani, who had previously worked as a designer on Street Fighter II. While the game had plenty of familiar faces like Ryu, Ken, and Chun-Li, it also had a roster of new and original characters that expanded over the next few entries in the Street Fighter EX series. However, due to Arika’s involvement, none of these characters ever ended up appearing in any other Street Fighter games. Arika later created a 3D arcade fighter called Fighting Layer, which included even more original characters, though it was left to flounder in obscurity.

Two decades later, Arika — most recently known for partnering with Nintendo on Tetris 99, Super Mario Bros. 35 and Pac-Man 99 — returned to the fighting game arena with Fighting EX Layer, which now arrives on Switch as Fighting EX Layer: Another Dash. Curiously, it doesn’t have any characters from the original Fighting Layer, but it does feature the original characters that they had created for the Street Fighter EX series. 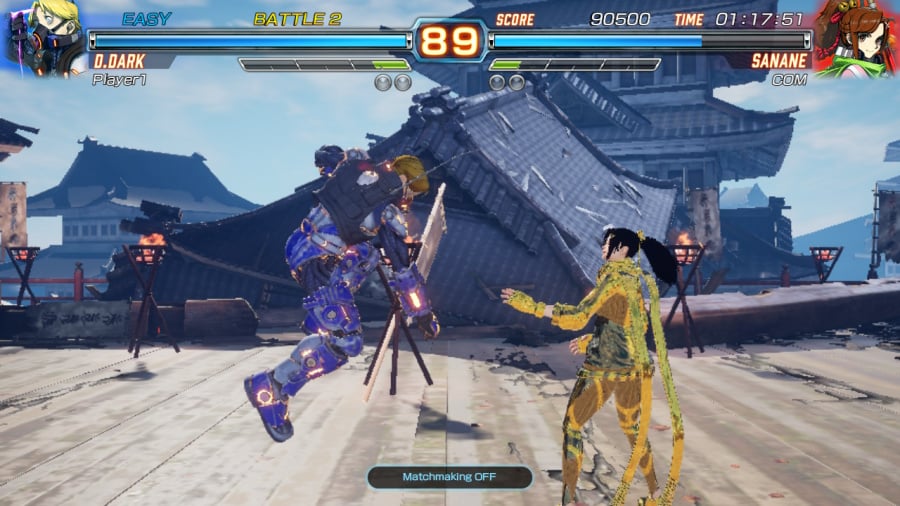 And they’re an interesting bunch, to say the least. While characters like Arabian dancer Pullum may have fit alongside Capcom’s classic characters, others like psychopathic mercenary Doctrine Dark and wacky sentai hero parody Skullomania didn’t quite fit, so it’s cool to see them given their own game where they can stand out. Some of the other more interesting fighters include rough-and-tumble bodyguard Cracker Jack, aristocratic brawler Blair, skull-faced armored warrior Garuda, American Shotokan fighter Allen Snyder, genius scientist girl Area, and gun wielder Sharon. Terry Bogard also makes a cameo appearance from Fatal Fury, probably to pay back Skullomania’s cameo in SNK Heroines: Tag Team Frenzy. There are 18 characters, which obviously can’t compare to The King of Fighters or Street Fighter V, but it’s a decent enough selection to mess around.

Since Fighting EX Layer is basically a spin-off (a couple times removed) of Street Fighter II, it plays pretty similarly, using six buttons and taking place entirely on a 2D plane. It does feature a fairly lax combo system, allowing you to easily chain together combos using regular, special, and super attacks. The fighting engine is easily the strongest aspect of the game, since it’s approachable and familiar to anyone even remotely familiar with 2D fighters, but offering enough flexibility that veterans can have a lot of fun with it.

Arika has been keen to note that this Switch version, subtitled Another Dash, isn’t merely a port but rather a totally new version of the game. In its original release, Fighting EX Layer used the “Gougi” system, which were a set of powers activated based on accomplishing certain goals in the fight. Well, that system has been entirely removed from Another Dash, for some reason. It wasn’t always popular with hardcore fighting games, who compared to Street Fighter vs Tekken’s widely maligned gem system, but it was also the key system that differentiated Fighting EX Layer from Street Fighter V, and it’s weird that it’s missing. 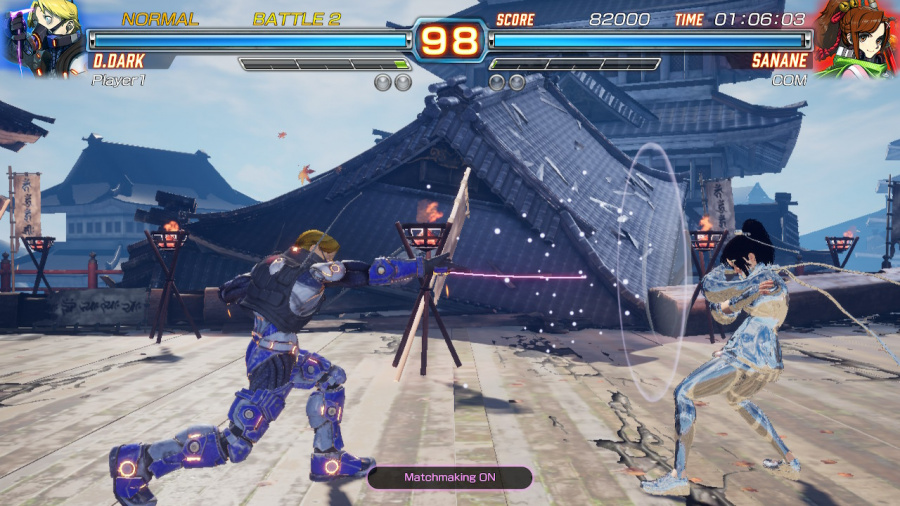 To take its place are a few new EX abilities — activating dashing (EX Dash), homing jump (EX Arrow), and counterattack (EX Illusion) moves at the expense of some meter — all of which can be used to launch into combo chains. The overhead attack has also been changed to a guard break move, a hallmark of the Street Fighter EX games. Unfortunately, these come with the removal of the normal dashing and backstepping moves, probably to emphasize the EX Dash, resulting in a game that feels a little slower than before. Why these were mandatory changes and not just an alternate arranged mode is unclear.

Since the original Street Fighter EX games were created for the late PS1/early PS2 era, the characters received a substantial visual overhaul. Arika obviously doesn’t have the budget of Capcom, SNK, or Arc System Works, so the graphics aren’t comparable to these bigger names, with shiny, plastic-looking character models that don’t really do a good job of capturing their 2D portraits. The Switch version is even further compromised, removing shadow and lighting effects, as well as textures, and running at a lower resolution. It can be especially ugly when the characters are wearing their shiny alternate costumes, which look so poor that they probably should’ve been removed completely.

The practical upside to this is that the game runs very smoothly, hitting a constant 60 FPS pretty much all of the time. Considering that many of the big-name fighting games skipped the Switch entirely, and the ones that did see release suffer from assorted technical issues, it’s nice to see a game that was properly optimized for the platform, even if the end result doesn’t look pretty. 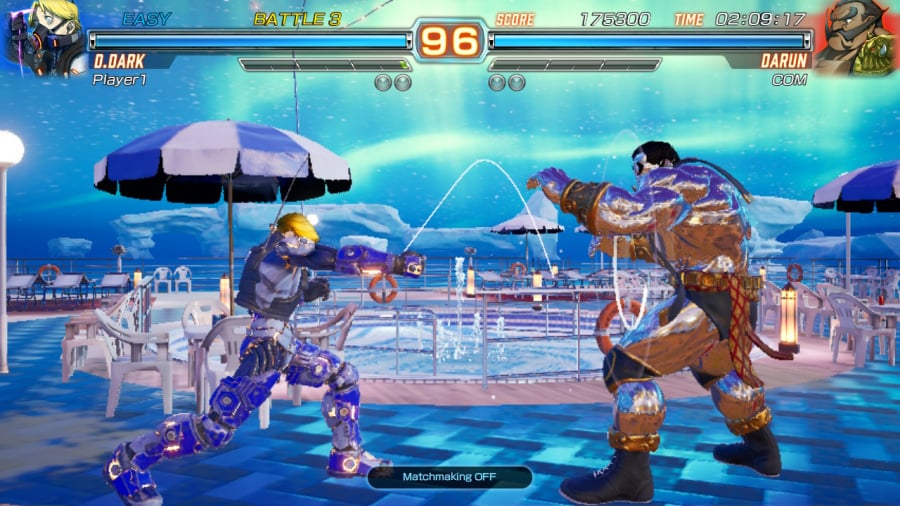 The original version of Fighting EX Layer used rollback netcode, making for an extremely smoothly playing online experience. Another Dash doesn’t presently, instead using “backstep interrupt” netcode, with the promise of a revised method using rollback at some point in the future. At the time of this review, the Japanese version has been available for two months and the North American/European version has been available for two weeks, yet during our sessions, we were only able to find one Casual match, and the population (and skill level) of Ranked matches fluctuated wildly. However, connections were always solid, even in portable mode over Wi-Fi, with only a few minor hiccups in the action.

Enjoyment of Fighting EX Layer is 100% dependent on online play, and of course Arika can’t control the game’s player population. But it is on their shoulders to offer some kind of alternative, and the single player experience is absolutely anemic. There’s just a standard Arcade mode with three difficulty levels, and endings consisting of a paragraph of text. There’s no tutorial either, just a bog standard training mode. When the game was brand new back in 2018 and Arika was slowly adding modes, this may have been acceptable, but having such barebones content three years after release is a poor showing.

The release strategy for this Switch port is a little less confusing than previous configurations, though. Another Dash has a free version which is basically a single player demo that includes four characters – Kaira, Shirase, Darun, and D. Dark. For $24.99 USD/ £16.49 UK / €19,99 EU, all of the rest of the content, including all modes, characters, and costumes, are unlocked. It’s reasonably priced considering it’s a late port of a three-year-old game, and makes it competitive against other more expensive titles.

Ultimately, Fighting EX Layer: Another Dash is a fighting game fan’s fighting game — its primary audiences are ‘refugees from Street Fighter V’ and ‘people who have nostalgia for Street Fighter EX’. Players in these two groups will find themselves very much at home with this game, especially since the fighting engine is so solid, and some of the characters are just offbeat enough to make it interesting. But considering it’s so dependent on online play, with barely existent single player content, it’s difficult to recommend to more casual players. It is, however, free to download, so you’ve got nothing to lose by giving it a try.

The Magnificent Trufflepigs review: the hills are alive with the sound of beeping

Review: Famicom Detective Club: The Girl Who Stands Behind – This Is The Spooky One