Review: Cotton Reboot! – The Wonderfully Playable “Cute ‘Em Up” Is Resurrected For Switch

Witches and shoot ’em ups have proven to be an enduring alchemy for gaming’s prevailing niche, with the likes of Magical Chase, Gunbird, Deathsmiles and Trouble Witches casting a spell of bullet patterns over several generations of gamer.

Success Corp. released Magical Night Dreams Cotton in 1991. One of the earliest examples of the “witch ’em up” and an IP that would go on to have a surprisingly long shelf life, the series has appeared on a host of different consoles. Sharp’s X68000 computer was first to receive an arcade port, followed by the PC Engine and PlayStation. The Super Famicom and Sega Saturn were privy to original, increasingly visually impressive 2D titles, while The Mega Drive and Dreamcast adapted the format into a 3D rail-shooter mini-series of two. The last Cotton game appeared on SNK’s ill-fated Neo Geo Pocket handheld, the only shmup in the console’s library.

In 2019, BEEP, a Japanese software retailer, released a special edition version of the X68000’s Cotton port on floppy disk. The venture, both ultra-retro cool and slightly crazed, isn’t the first time BEEP has achieved such a feat, releasing shoot ’em up Valist Leznalt in the same format a year prior. Cotton’s re-release has now coasted onto Switch, PS4 and Steam in the form of Cotton Reboot!, and is slated for a forthcoming western localisation courtesy of ININ Games. 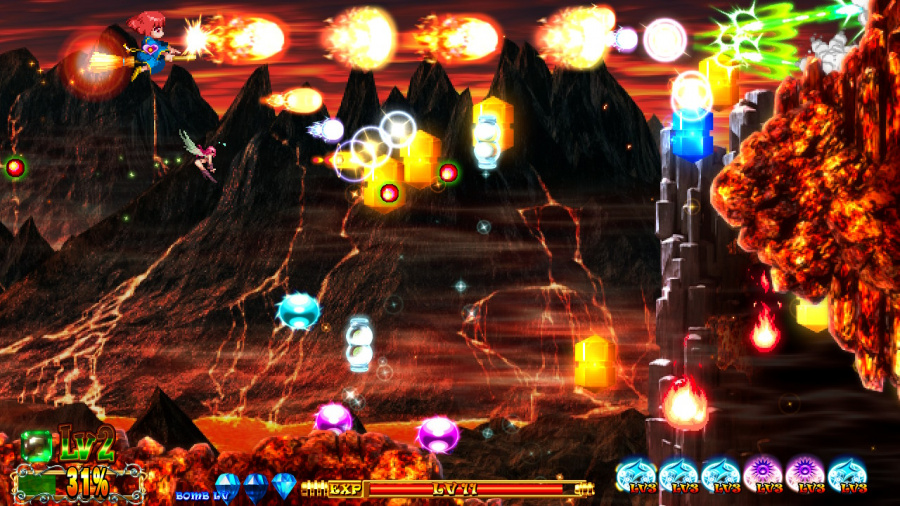 BEEP’s opting to port the X68000 version over the arcade original is thanks to its graphical superiority, exclusive bosses and new attack patterns. It is, definitively, the best version of Success’s original game, and the refined colour arrangement is buttery-gorgeous. The special edition features a graphically-enhanced Arrange mode in 16:9 widescreen, a near-perfect version of the X68000 original, and a ‘Caravan’ mode that gives you either two or five minutes to accrue points on a specially prepared stage.

The X68000 original is a prize of early ’90s pixel art; its sunsetting, frame-worthy opening title screen launching you into an enchanting world of night. A straightforward horizontal-scrolling shoot-em-up featuring a blazing red-haired witch on a broomstick, the game’s rendering – a pastiche of horror tropes and cartoony eccentricities – is colourful and rich in character. With nicely-defined enemies and objects, the first stage’s lake, twinkling beneath silhouetted houses and a pre-Majora’s Mask evil moon, sets the tone well. It treads a fine line between sinister visual material – some of its bosses being particularly menacing – while staying playful with its protagonist, her fairy sidekick Silk, and a series of comedic anime cutscenes. 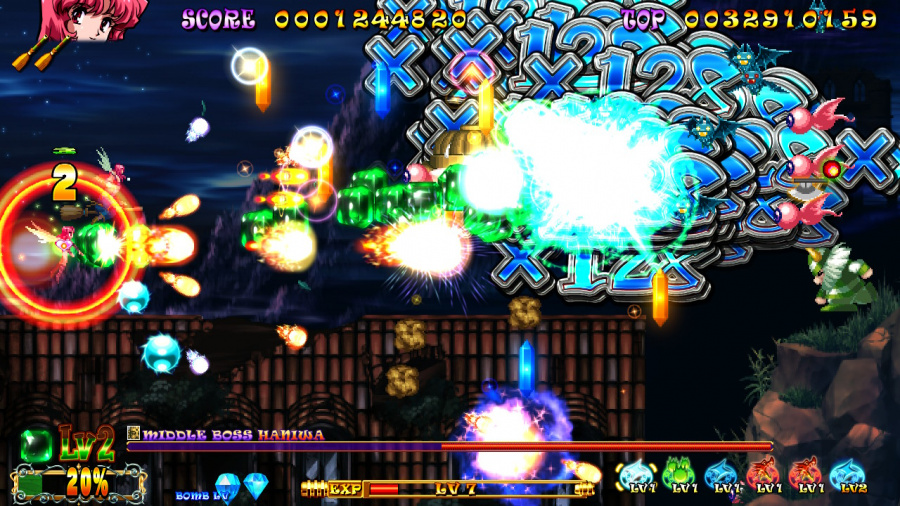 Your heroine – the pint-sized Nata de Cotton – is on a mission to get as much Willow Candy as she can lay her hands on; and plot-wise that’s pretty much it. Silk, your micro bikini-clad fairy accomplice, can be picked up during the game as an option, trailing you Gradius-style to add heft to Cotton’s shot range and ground bombs. Lose a life and you lose half of your shot power and, unless you can grab back their scattered orbs, some of your fairies. It’s not clear if the port is emulated or re-coded from the ground up, but it includes a native CRT mode and a new BEEP Edition difficulty setting. And it’s superb fun, spatially well defined with a nice balance of risk and reward where powering-up is concerned. Not too taxing in terms of difficulty, it feels great to raise Cotton’s shot power and plough through its carnival of cutesy horrors.

This being a special edition, the X68000 port has been given a huge makeover in the game’s Arrange mode. While the original’s pixel art is so attractive that some players might prefer it, the reboot pumps up the jam without losing any of the charm. In addition to beautifully redrawn sprites and backgrounds, the mechanics are substantially remixed into an altogether louder, more vibrant affair, with a greater emphasis on scoring.

Cotton is now quicker and her default shot is broader and more destructive. It’s also faster to power up to max strength, which helps combat the increased number of enemies and stronger bosses. Cotton’s hook is gem collecting, and, not dissimilar to TwinBee’s bells, gems dropped by enemies can be shot multiple times until they change colour. In the X68000 original, gems regularly threaten to drop off-screen, requiring you to juggle them before sweeping in, but in Arrange they float along calmly, making them much easier to grab. Yellow and then orange gems – the initial two states – increase Cotton’s EXP gauge, powering up her main shot. Blue and red gems grant lightning and firebombs, while Arrange-exclusive green and purple gems drop boulders and mushroom-cloud nukes, respectively. In another new feature, bombs can now be levelled up three times by collecting gems of the same colour, increasing their power. 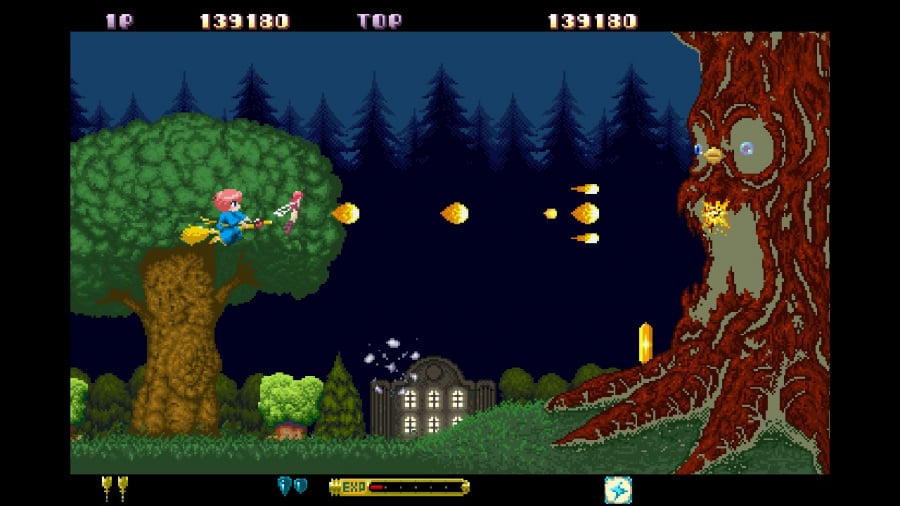 With endless opportunities to obtain bombs, using them liberally is advisable. Bombs also have dual functionality, with a long button press converting them for defensive usage. Lightning bombs can be turned into a useful bubble shield – and newcomers will do well do farm blue gems for this purpose – while long-pressing the firebomb sends your Silk fairies into a flaming rampage around the screen.

Arrange, modelled on modern, adrenaline-fuelled shmup archetypes, is so stuffed with fresh ideas it often feels closer to a sequel than a remix. While tougher, it still maintains a comfortable difficulty threshold that’s been tweaked and tuned in countless ways. Not only does Cotton’s shot now rip across the screen, but it’s further amplified when hitting uncollected gems, splitting into powerful twin lasers that are particularly useful for bosses firing destructible projectiles.

Scoring, too, has been completely overhauled. A new Fever gauge, denoted by a multiplier situated in the bottom-left of the screen, ticks higher based on survival and usage. Once triggered, your laser – particularly when split over gems – converts destroyed enemies into satisfyingly huge, screen-filling point icons. Visually similar to Espgaluda’s Kakusei cash-in, Fever mode is only active for a brief period but quickly regenerated, encouraging you to figure out how to maximise its scoring potential. 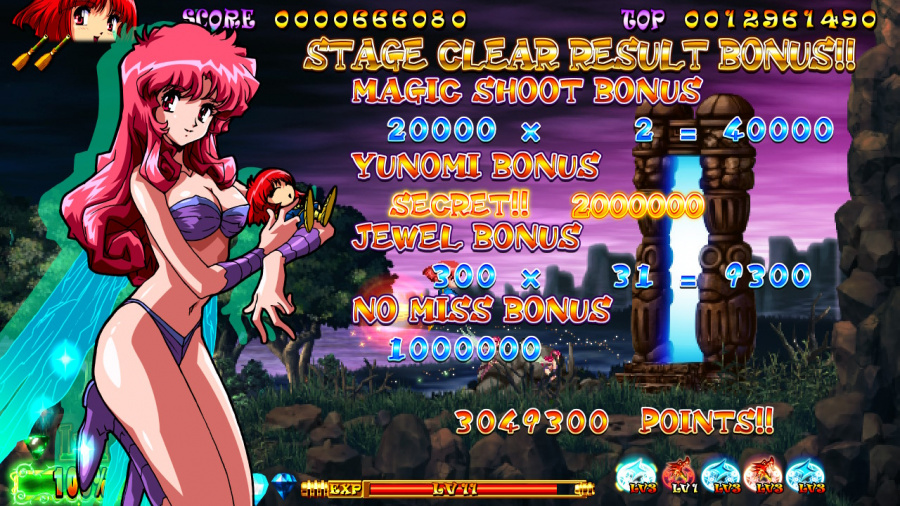 The other feather in Arrange’s scoring game is the addition of Black Crystals, which are created by shooting regular gems until they finish cycling colours. These gems start at a value of 10,000 points and then multiply with each subsequent pickup. If you can catch ‘em all the scoring potential is enormous, but, unlike other gems, Black Crystals will eventually break if shot too much, killing the streak. Incidentally, your purple bomb’s secondary usage converts all on-screen crystals into Black Crystals and then magnetically draws them toward you, making it an indispensable choice for score chasers. And of course, the Tea Time trick at the end of each stage is also present. If you can successfully avoid every raining teabag you’ll be gifted a sweet two-million point bonus to put toward life-extends.

While these new scoring mechanics, should you care to utilise them, open up novel dimensions of approach, basic survival in Cotton is still geared around pattern recognition; and while it takes some time to get to grips with its multi-faceted bomb and option system, you’re in for a spellbinding adventure that’s impressively varied regardless of whether you play original or Arrange. Stage layouts rarely stick to a straight line, having you ascend and descend on your broomstick into forests, tombs, and through meandering caverns.

Whether you prefer the original X68000 game or the Arrange mode really depends on your sensibilities. They play two very different games. For a cleaner, slower, slightly easier experience, where you have time to appreciate the graphical details and mark out a strategy, the X68000 port will serve you better. 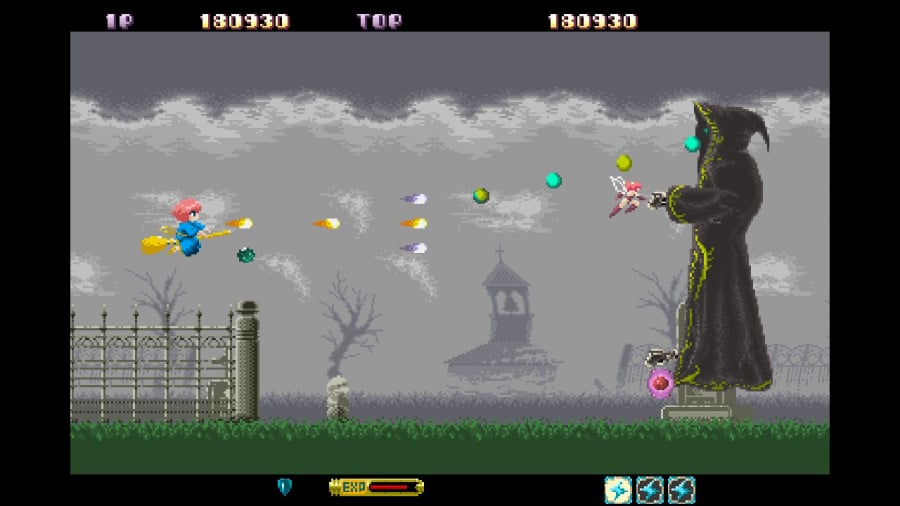 For a more modern, complex, and altogether more explosive shmup, Arrange, while not quite bullet hell, is exponentially busier. If there are any criticisms to be had with the way Arrange has been handled, it’s that it’s ploughed with so many new scoring angles that it’s arguably slightly over-baked, especially when the screen is littered with gems, power-ups, shiny special effects and all manner of incoming projectiles.

Even though the contrast between background and sprites is more pronounced, it still gets cluttered; and with bullets travelling behind effect layers and foreground scenery, it’s not uncommon to unexpectedly eat one. This issue is most pronounced against stage six’s lava background, and, while it’s a fray that can certainly be negotiated with practice, the amplified, cacophonous action does distract from the game’s delightful Halloween world. Despite this, it’s still blazingly good fun, especially if you like carving up the screen and bombing like there’s no tomorrow. It’s a wild alternative to the more measured X68000 original, and, despite its light and fury, still sits somewhere at the easier end of the shmup spectrum. 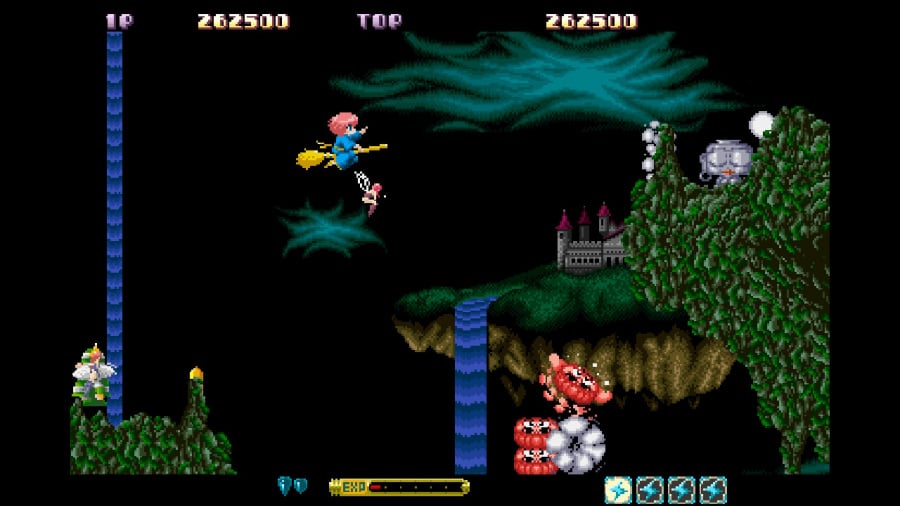 With just six stages and an appended last boss, Cotton takes approximately thirty to minutes to clear initially. If you think that’s not value for money, then you’re not playing it right. Shmups are a genre inextricably linked to an arcade format and the discipline of maximising playtime with a single coin. If you credit feed through and consider it beaten on your first attempt, you will wring little value from your purchase. To play Cotton for fun is to play it well; learn its stages and various boss attacks, maximise your scoring techniques and go for a respectable one-credit clear. And for those that put in enough effort, both Silk and Trouble Witches’ Pril Patowle can be unlocked as playable characters with different attributes.

The running animations in Final Fantasy XIV are my everything

Mini Review: Subnautica: Below Zero – A Rather Cool Sequel